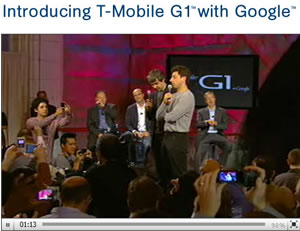 Did you see the Google fanboys at the G1 mobile launch yesterday?

When ‘surprise guests,’ Google head honchoes Larry Page and Sergey Brin came on stage there’s was mass rush for anything that can take a photo, to snap pictures of these strange stars.

Video camera, still camera and mobile phones were grabbed and raised aloft in an effort to capture the moment when the assembled were breathing the same air as these hallowed beings.

As a remote observer, it felt like this was a story that those there would be dinnig out on the story and eventually be telling their grand children about in the future.

We found it pretty bizzare.

One thought on “Google Fanboys At G1 Launch”