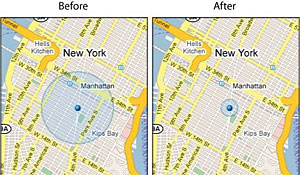 We’re been feeling big time love for Google’s freebie Mobile Maps application for some time, and the experience has just got a little bit better thanks to the efforts of their team of ever-industrious boffins.

Google Maps MyLocation
We’re big fans of Google MyLocation’s feature which lets you quickly work out roughly where you are in this big crazy world without a GPS wotsit, and now the bods in the backroom have worked their magic on their location technology to make it even more accurate. Here’s what they say:

“With today’s launch, your location estimate will be centred closer to your true location, and we have also improved the calculation of just how good our estimate is. When we originally launched the “blue circle” on Google Maps for mobile, the circle usually stayed the same size no matter if you were in downtown Manhattan or rural Iowa. 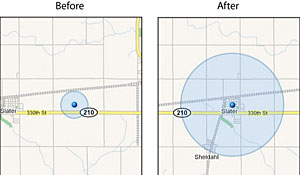 Here’s Josh and, err, Pegman, to tell you all about it:

Google Maps with public Transit
Although Google’s map directions in the past have been aimed at gas guzzling, fume-belching car drivers, the company is now offering public transit directions for folks who like to use their legs.

The search giants have partnered with ‘forward thinking transit agencies around the word’ to offer bus train and ferry directions to Google Map searches. Now, when you look up directions a new transit tab offers step by step instructions for getting to your destination using public transport, with times and fare costs also displayed.

The app works in conjunction with the MyLocation feature, so if you’re hopelessly lost, you can fire up your phone and be given info about where you are and how you can get the hell pout of the place. The app even lets you know the times of the last train/bus home (which, if you live in Brixton, is always “too ruddy soon.”)

Check out the squeaky-voiced Google tech’s explanation of this most excellent service:

Unfortunately, the Street View and the Public Transport features are currently only available for BlackBerry and some Java-enabled phones, but hopefully the service should roll out to all varieties of Google Maps.