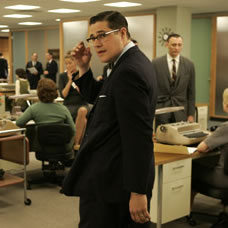 As with all new forms of communiation, after a while of them being about, some clever creative types comes up with an idea that uses the technology, allowing them to flex their creative muscles.

One of the oft-cited example is Lonely Girl on YouTube which proported to be a 15 year old girl stuck in difficult times. Within a short period of time LonelyGirl15 was rumbled as being connected to Hollywood powerhouse talent agency, Creative Artists Agency.

Now Twitter
As we all know, Twitter has been around for quite a while now, so it was interesting to hear about a similar creative writing excercise taking place on there.

Someone has taken on the identity of 60’s advertising exec Don Draper and is gathering quite a few fans. ‘He’ currently has nearly 2,000 followers on Twitter.

It all appears to be done to try and extend the reach of a TV series, Mad Men, that’s currently showing in the US that is based around an advertising agency, the Sterling Cooper Advertising Agency, in the 1960s.

It’s a good idea, because Twitter feeds its followers with little nuggets of info – fuelling their desire for more, and we would assume, a stronger desire to watch the TV programme.

More good ideas to come
A coupld of weeks back, we’ve heard of another Twitter-based idea by Dig-Lif chum Simon Ellinas as well, but the details of this will have to be held secret until he ready to reveal more. It sounds like a good one though.