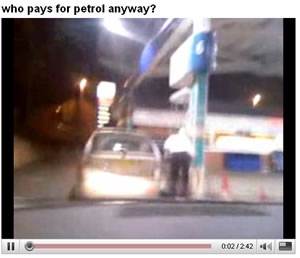 A UK Judge has banned a 23 year old man from boasting of his crimes on the Internet.

On the 11 July he posted a comment saying that he was stripping out loads of his video, “not to look good in court as i think its a little late for that,” but rather to give himself a fresh start.

Strangely for someone who saw himself as cleaning his act up, he’s still got a video called “who pays for petrol anyway?,” which is described as “two people in a car {one of them sounds like me but isnt},” where they go on to boast about deciding “to give gordon brown a big F YOU by deducting the tax.. and cost of petrol.”

Comment that have been added by other since then are rather less than complementary.