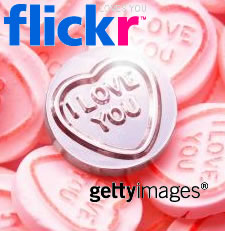 The deal between Getty and Flickr, which exclusively gives Getty the right to pick the best images from Flickr and sell them via gettyimages.com to their customers in the creative, commercial and editorial industries — they call it the ‘first commercial licensing opportunity for photo-enthusiasts in the Flickr community’ — is, in many ways, inevitable.

Getty have caused a considerable amount of heart ache to professional photographers by re-adjusting their rates and contracts for images in their commercial library.

From discussions we’ve had with pro-snappers, they’ve been saying that it’s almost getting to the point to where it’s not worth submitting photos to Getty as the returns are just too low.

The sheer number of photos that are being taken by millions of photographers around the world on a daily basis means that at least _some_ of them must be good quality.

Effectively what Getty are doing is offering an editing service where they’re sifting through a huge selection of images on Flickr and picking out the ones with artistic merit.

There’s little doubt that the amateur photographers that upload their images to Flickr would be flattered to be asked by Getty to have their images included in their library.

Good for Getty, good for Flickr, good for the amateur photographers – not good, at all, for professional photographers, who will see and feel extra pressure on their earning potential turn up a ratchet or three.