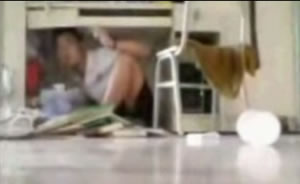 We covered yesterday morning how photos taken by individuals in Chengdu, China and posted to a mobile social network site had beaten news reports to publishing the story.

Now we’ll focus on the videos that were shot by ordinary people in China of the earthquake.

Video brings the advantage of actually seeing what happens during the quake, rather than capturing the split seconds, like a photo does.

It really brings the viewer closer to experience the fear of an event, where the earth beneath you starts to shake.

The video below shows the view from under a table (a good place to be in an earthquake) as the tremors severely shake what looks like student accommodation, in Chengdu. The drama is heightened due to the less than perfect video that mobile phones give.

Despite the obviously distressing situation, the cameraman thinks to video the time of the event on his PC clock (although it’s difficult to see given all of the shaking), but then goes on to give a context shot out of the window to show other students gathering in the space between the buildings

Other videos are less dramatic, such as the one filmed by ponds West-North University, Xi’an, Shanxi, but illustrate the distance the impact of the quake spread over.

There’s also footage from Beijing, when the quake reaches them two minutes later (it’s a long way away from Chengdu), as we can see things hanging from the ceiling swinging around.

Mainstream Media: Becoming less relevant
Coverage like this, by people, for other people embarrasses the offerings that the mainstream media can offer. Established media companies will, of course, air this footage, in an attempt to stay in touch with what is happening.

The reality is that mainstream media are becoming less relevant by the day, as people are able to speak to people.