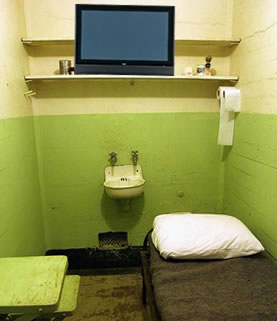 Yesterday in the UK Parliament, John Spellar, Labour MP for Warley, asked how much the Prison Service spent on “providing satellite television services in prisons in 2007-08.”

Maria Eagle (Parliamentary Under-Secretary, Ministry of Justice) told him that the answer couldn’t be given, as costs that small aren’t recorded.

She did point out that satellite TV wasn’t available in inmates cells (cue sigh of relief from Daily Mail readers) and it was up to the Governor if it was laid on in the shared areas at all.

“A number of establishments have been upgraded for digital television in line with the Government’s digital switchover programme,” so that’s a relief.

All of these costs are covered by charging inmates £1 per week to rent the goggle boxes to have in their cells.

Quite what it’s like getting dTV reception through prison walls into the cell isn’t clear!