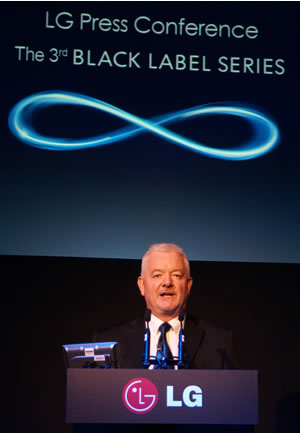 After all of the hubub at the LG Secret, the KF750, global launch died down a little in London, we caught up with John Barton, LG UK Sales and Marketing Director, to find out more about the LG Secret.

After bits and pieces about the naming of the product —
Why is it called secret? His take – the phone reveals itself to the user as they use it — we got on to talk about the M-Toy feature.

M-Toy
M-Toy uses the accelerometer built into the phone that opens the handset up as a handheld gaming platform – effectively a Handheld or Mobile Wii.

This is especially true when the Secret is used with the TV-out cable, letting the games be shown on a large format TV.

Other games for the LG Secret?
It doesn’t sound like they’ll be opening the platform for individuals to write games — a mistake in our opinion, it would be better to let the number of games available explode — but they told us that they have been is discussions with games companies already.

Almost inevitably EA Games was mentioned as a company that could be writing games for LG handsets.

Android – It might not win
when asked about Android, John Barton, left it hanging but pointed towards the question, Is it what the networks or the developer wants?