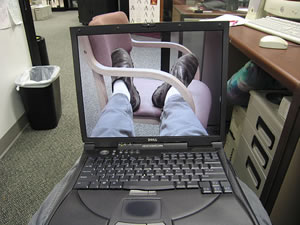 You may well be aware of the transparent desktop crazy that’s been around a few years (we used a photo earlier this week).

It gives the impression that the computer screen is invisible – nothing more than a frame.

If you’ve not seem it … it’s well worth a look as, when done well, quite a few of them can be captivating.

Here’s a couple highlights that we found

Since its start, like many of these fads, it’s gone in different directions too, with mobile phones with the fingers behind being a favourite and even in car entertainment systems being used.

Some people have even mixed x-rays with real life to good effect.

As some Danila pointed out on the Flickr pool, one of the probable influences for all of these photo is Rene Magritte‘s “The Human Condition” painted in 1935