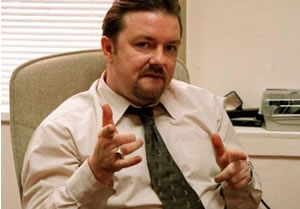 In what we think is a first, Ricky Gervais will deliver comedy routines in a video game, Grand Theft Auto IV.

Widely touted — often by himself — as the funniest man in the world, if not further afield, Gervais will deliver three minutes of new material, as well as some from his Fame tour.

He’s described to Shortlist magazine how the material was captured in New York, but that he was forced to wear a tight Lycra suit – pretty frightening.

Dripping out news like this, are all part of the PR campaign in the build up to the launch of GTA IV, as we’re all being encouraged to call it.

Grand Theft Auto has had a long an successful history, giving the player the ability to decide what they want to do in the video, including nicking cars and knocking people about a bit.

It’s going to be available at the end of this month and will play on Xbox 360 and PS3.