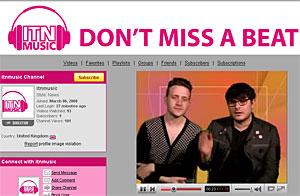 Deftly spinning their baseball caps so they face the wrong way around, the hipsters at ITN have decided that it’s time to get down with the kids by launching two more ITN YouTube channels.

We kinda hoped that the new channels would be called something hip’n’street like ‘Da NewZ From ITN Innit’ but sadly they regale under the rather duller names of ‘ITN Music Channel’ and ‘ITN News Channel.’

The new YouTube music channel adds to ITN’s existing showbiz news channel and is designed to keep music fans up-to-date with the latest music, festival and awards news from the UK and elsewhere in the world. Content from ITN’s large archive of music and festival footage will also be dug up and reused to tie in with upcoming music events. 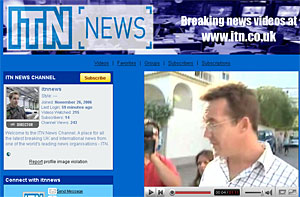 The second channel, the ITN News Channel, aims to keep attention- challenged folk gripped with a series of 90-second reports and news.

YouTube’s Patrick Walker high-fived the room, made the secret YouTube gang sign, adjusted his low slung pants and whupped, “ITN’s first channel has been extremely successful reaching millions of users around the world, and we are delighted to see them launching two more channels on the site, bringing even more quality news content to the YouTube community.”

The music channel looked to be off to a slow start though, with a mere one subscriber in tow as of this morning, while the news channel was rocking with a slightly healthier 14 subscribers.