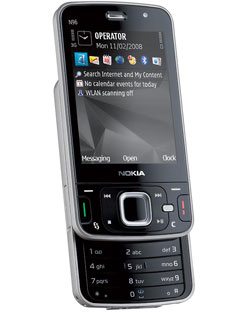 Featuring more bells and whistles than a loved up gang of NuRave Morris dancers, Nokia have unveiled their new Nokia N96 high end handset at the Mobile World Congress 2008 in Barcelona.

Billed as being optimised for video and TV, the N96 sports a beefy 2.8″ 16m colour TFT, QVGA (240×320 pixel) resolution screen, 16GB of internal memory and support for high-quality videos in a wide range of formats, including MPEG-4, Windows Media Video and Flash Video.


There’s an integrated DVB-H receiver onboard offering live broadcast TV with an auto program guide with built in memory storage for 40 hours of video content, with up to 8GB of additional storage available via a microSD card.

Shifting content on and offer the phone should be a reasonably speedy process with USB 2.0, WLAN and HSDPA support, while a ‘kickstand’ on the back cover lets you prop the phone up for easy viewing.

Nokia have had the good sense to include a 3.5 mm headphone connector with media keys and built-in 3D stereo speakers ramping up the multimedia credentials. 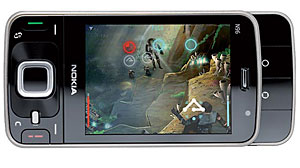 In line with its iPhone-crushing ambitions, the Nokia N96 boasts a 5 megapixel camera packing Carl Zeiss optics, with flash and video light for capturing late night action, with Nokia claiming that the phone is capable of ‘DVD-like quality video’ capture at 30 frames per second.

The integrated A-GPS, lets users ‘geotag’ their pictures with location info and share them online. Nice.

“In 2007, the Nokia N95 became an icon of convergence of Internet and mobility. With over 7 million units sold to date, the N95 has changed the way people use their mobile device. The Nokia N96 we introduced today builds on the success of N95, further enhancing the experience,” enthused Nokia spokesdude Jonas Geust.

“Through the power of the Internet, video and TV are becoming even more prevalent in people’s lives. With its large, bright screen, and a range of high-speed connectivity options and the enhanced Nokia Video Centre, the new Nokia N96 is a personal window to entertainment,” he continued. 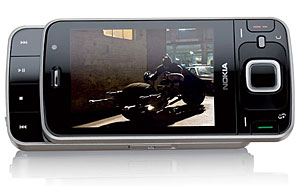 The Nokia N96 is expected to begin shipping in the third quarter of 2008 with an estimated sales price hovering around 550 euros.