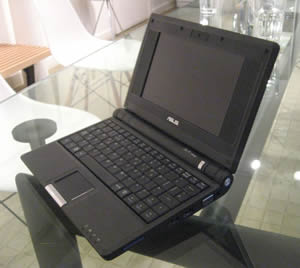 Well, spent the day getting the reduced Windows install to go down pat, and it works (largely) like a dream – and it’s certainly faster than some full size lappies I know.

The keyboard though, being so small is a bit of a drawback for those that touch-type. It’s just so small! And the decision to make the right hand shift key the same size as a normal one, and position it to the left of the up cursor key is a killer, I’m constantly shifting up a line instead of shifting for caps. 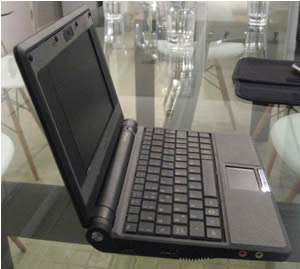 Small potatoes though really – it’s a lovely little machine. I was out for dinner with a load of people tonight and passed it round the table (yeah, I’m such an interesting chap) and there were many admiring and excited coo’s about it’s size and how truly portable it is.

The tiny 4gb SSD (solid state drive, ie. it’s hard drive) will become an issue though – especially with my immediate XP install. Despite stripping the XP install to 150mb, and the final install topping out at 450mb with a few basic apps added, the drive is coming up with 2.93gb used, with only 800mb free – and I haven’t even installed Open Office yet.

There’s some reading to be done there, as I’m certain it should only be a third of this. [Edited to add: Disabled the Page File and the space suddenly jumped to nearly 3gig] 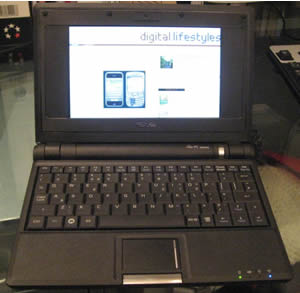 It also gets surprisingly hot – I feel like I’m typing on a mini- handwarmer. I wrongly assumed the absense of a HDD would have made a difference. The EEE still has a fan and it certainly needs it.

Battery life with simple browsing is about 2.5 hours, the charger is the smallest I’ve ever seen for a laptop – no plug and brick, it looks like a slightly larger than normal, Nokia phone charger.

The screen is obviously small. Which in itself shouldn’t be a problem – except that most browsers and websites are very inconsiderate. By this, I mean toolbars in all browsers: at the very least you have the app title line, the main menu bar, then the tab bar, then the standard action / address bar. All of which are fine normally, but in a screen this tiny, it’s taking up an inch, which is very precious.

Visit youtube, and you’ll be hard pressed to fit the video and the controls on the screen without having to scroll.

Sacrifices and niggles that can largely be explained and excused by the size. You know what you’re getting into when you buy this little thing, so there shouldn’t be much room for complaint. Especially at the price.

Personally, I love it, and will love it more once I’ve figured out how to reduce drive usage and practiced typing on it’s diminutive keyboard.