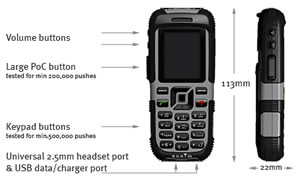 Everyone’s had that heart stopping moment when their mobile phone falls from they hands and tumbles towards the ground – there’s a frantic reaction as you attempt to grab for it with flailing arms, often resorting to placing your foot in the way to try and brake the fall.

With a newly-announced phone, the Sonim XP1, this will no longer be a problem, in fact, it looks like you can be pretty rough with it and it’ll still work.

Sonim tell us that the XP1 is an IP54 tested (a new one to us), mil-spec approved, water-resistant, bluetooth and Push-To-Talk enabled GSM phone. It certainly looks the part – all rugged and yellow.

In the UK it’s being marketed as the JCB Toughphone.

They gave it to a bunch of European journos and blogger, who did nasty things to it, in an attempt to break it – luckily videoing it for us to see.

I’m not sure how often you’re going to need to attach your phone to a rocket, but just in-case you do, they’ve tested that for you too. It ended up with burn marks on it, but they could be see as some sort of an honour badge. couldn’t they?

They’ve even got it being used as a hammer – but it should be noted that they don’t show it working afterwards.

There’s also a pretty sever wheel spin test, where an Audi TT does is best at ripping it apart.

It appears that the Swedish like shooting electrical items, and true to form, they’re been having a really good go at trying to destroy the Sonim XP1. They run through a series of weapons – a 4.5mm air rifle; Ruger 10/22; Glock 15 9mm Pistol. It looks like it’s the Remington 700 7.62 which actually finishes it off – not surprising when you realise it’s a mother of a weapon.

The XP1 / JCB Toughpone is going up against the Samsung Soild / SGH-M110. Sonim acknowledge that the Samsung might have more features, but claim it’s not as tough.

We’re going to be getting our hands on one shortly and are plotting evil acts to test its toughness – any ideas?