This year has been different though and Apple announced their new MacPro line-up at CES in Las Vegas, probably because the machines are based on new Intel CPUs which Intel announced there too.

New MacPro
Apple’s desktop range haven’t been updated for a while (except for a few processor speed’ups), but now they have and they’re all based on the new Intel Penryn CPUs (quad core using a 45nm process). 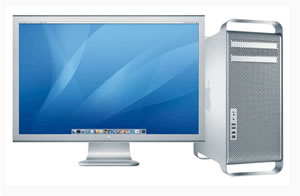 All MacPros now come with 2 CPUs which gives them 8 cores (though they can be ordered with only one CPU at the basic 2.8GHz model). The speed then goes up to 3.0GHz or 3.2GHz.

The graphics selection has improved with both NVidia and ATI cards to choose from. The basic config comes with a single NVIDIA GeForce 8800 GT 512MB GDDR3.

There’s then options of one or two 16x SuperDrives, an Airport Extreme card (which is Apple’s name for 802.11n WiFi), a USB modem, Fibre Channel card, wired or wireless mighty-mice and (new) keyboards.

Cinema displays can also be purchased.

Apple’s Xserve has also been updated with the new CPUs.

Tomorrow we consider what might be coming up at MacExpo.

One thought on “Mac Pro Gets 8 Processor Cores”