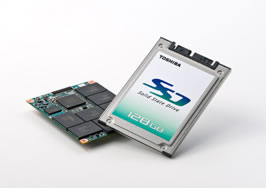 There’s been some discussion over the last year or so about Solid State Drives (SSD) becoming a serious competitor to ‘normal’, moving hard drives.

One of the barriers to serious and wide uptake has been the relatively limited capacity of the SSDs.

Today, the reality of SSDs becoming a more regular addition to our computers came a step closer as Toshiba announced in Japan that they would be mass producing SSD next year. Capacities will be 32GB, 64GB and 128GB, taking the form of 1.8-inch and 2.5-inch.

They’ll be on show at CES in January, with samples being available between January and March. Some publications are reporting a wide release in May, although this isn’t in the official press statement.

If you’re feeling brave, here’s the Japanese to English translation (err, not English to Japanese as we’d originally said, thanks Sean!)