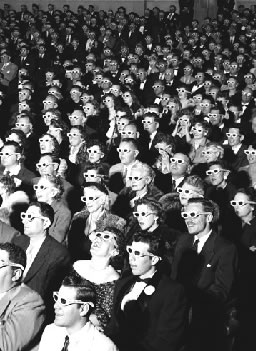 Disney is publicly stating their commitments to the digital 3D format for films – in our eyes, for good reasons – keeping people in the cinema.

Reuters has a story with a quote from Chuck Viane, Disney’s president of domestic distribution showing his love for 3D, “We absolutely believe in the whole concept of 3D and the enhancement that it brings in the ability to separate us from any of the other mediums.”

Big studios are desperate for ways to differentiate going to the cinema and what people can achieve at home.

Pump Up The Volume
The most obvious change that they made over ten years ago was pumping up the sound system within cinemas, creating more atmosphere and helping the audience feel the film. As consumers have now moved on in what’s realistically available to them at home, that benefit the cinemas had has now evaporated.

We now live in a world where, if a film viewer is so inclined, they can download a new film release and watch it in the comfort of their own home. Clearly the film’s creator doesn’t benefit from this at all.

3D: Short Term Panacea?
By embracing 3D, the films studios create another barrier to entry – a big step up that the consumer can’t reproduce at home – yet.

As with all barriers, the best type for established business with lots of money, is one that is expensive.

Steve Schklair, CEO of one the suppliers of 3D technology to Hollywood, 3ality, told CNET that creating a film in 3D cost an extra 5% – 20% extra, but this increases if the film is ‘low budget.’

It sounds like Hollywood is more than willing to make this happen as Disney’s Viane is hoping to get, “somewhere between 1,200 and 1,500 potential 3D screens,” in the US.

How long will the barrier stand?
These currently add up to a pretty effective barrier, but as with all of these technology, the time will come when having one of these at home will become achievable.

You can bet that the Hollywood Machine will be making the most of the 3D difference, to try and get as many people in the cinema, spending money as possible – for as long as they can.