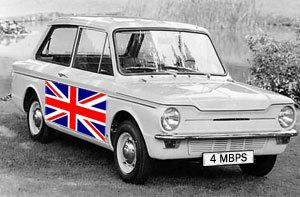 Broadband industry bigwigs are meeting with government bods to see what can be done to stop good ol’Blighty falling into the “slow lane”.

Although over half of UK homes are hooked up to a broadband connection, motoring along at an average speed of four megabits a second (Mbps), this looks decidedly stately compared to the ultra-fast networks proposed in other countries.

These will be capable of delivering breakneck speeds up to 100 Mbps, which would leave Brit businesses floundering in the Hillman Imp lane of the Internet.

Government ministers are keen to see UK broadband speeds cranked up to the ultra-fast speeds of our continental competitors, insisting that such a network would be essential to let them, “innovate, grow and create wealth”. 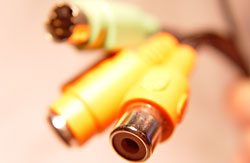 A forthcoming broadband summit will look at how industry, government and regulators can get it on to ensure that the UK gets a superfast, next-generation network capable of handling modern Internet traffic, like high quality video streams.

“We need to be discussing how we can put this new network into place, because delay could be a barrier to the future success of our economy,” said Stephen Timms, a man blessed with the fantastic job title of ‘minister for competitiveness’.

The BBC reports that BT, the UK’s biggest broadband provider, has already made gloomy noises about its ability to pay for an ultra-fast network, but cable company Virgin were far more optimistic, claiming that they’re on track to deliver 50 Mbps broadband by the end of next year.

This represents a doubling of their current highest speed and the company expect their cable 50 Mbps service to be available to more than 70% of the 12.5m homes it supplies by the end of 2008.

Happily, this doesn’t mean our poor roads are going to be dug up all over again, as Virgin say that the speed increase will be achieved by installing new gear at the hubs and bundling together spare channels.

However, with most of us getting our broadband through existing Ye Olde Copper telephone lines, we can expect a longer wait before we can rev along in the fast lane.

Although BT is prepping the faster ADSL2+, speeds will be limited to a maximum of 24 Mbps and it may be several years before all the country is covered.