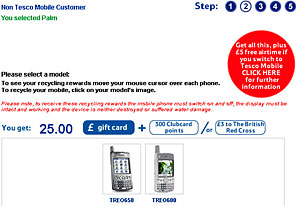 In a shameful indictment of our wasteful, throwaway society, around 2 million mobile phones – many of them perfectly usable – are expected to be thrown away over Christmas.

The findings come from a recent Tesco Mobile survey which discovered that almost 11 million Brits expect to shell out for a new mobile phone over Christmas, with 20% of them just lobbing the old one in the bin.

The survey also discovered that two thirds of Brits haven’t the foggiest idea how to recycle gadgets, while just 18% of people bother to recycle their handsets. 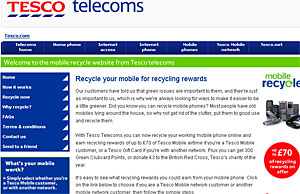 Andy Dewhurst, chief executive officer of Tesco Mobile comments, “These results are very worrying. We’ve decided to take positive steps in response to these findings and have recently launched an online mobile recycling service – www.tescomobilerecyle.com and re-launched our recycling envelopes in stores with the aim of recycling 1 million mobile phones in the next year alone, helping to reduce the number of handsets that go on the scrap heap and making it even easier for our customers to recycle easily.”

The Tesco Mobile Recycle scheme will let let punters recycle any working mobile phone, earning rewards of up to £70 of Tesco Mobile airtime or Tesco gift vouchers. Users can also get 300 Green Clubcard Points or elect to donate £3 to the British Red Cross.

Visitors to Tesco’s website can find out how much their old handset is worth (our Palm 650 manages £25 plus 300 Clubcard points) and then input their address details to receive a postage paid envelope while doing their best to ignore Tesco’s efforts to get you to switch to their their network.

Other reycling options include Oxfam, Action Aid recycling and Fonebak.

One thought on “Two Million Mobiles In The Bin At Christmas”