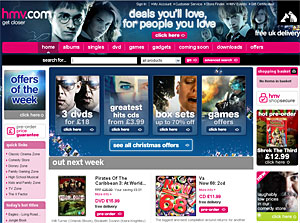 Retail big boys HMV and Play.com have announced that they will be joining the online party by launching their own film download services in the next six months.

Play is understood to be whipping out its a movie download service within the next few weeks, while HMV’s service is still getting polished up for a launch at the beginning of next year.

A report on the New Media Age website says that HMV is hellbent on making itself a major playa and claiming a significant place in the market before some other big shot Charlie turns up to claim the pie.

“We don’t want an 8-tonne gorilla to place itself in the room like iTunes did in the music industry,” he added.

Elsewhere, BT Vision’s broadband service – which offers a 80GB Freeview PVR with video-on-demand – has failed to capture the public imagination with a mere 60,000 boxes sold since its launch – far short of the “hundreds of thousands” of units initially targeted.