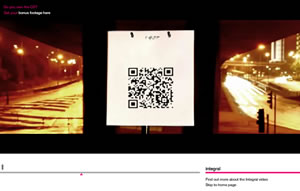 Those krazy kids, The Pet Shop Boys, have released their new single.

Why are we interested? Two reasons, it’s drawing attention to UK ID Card – which we think are are serious blow for the future of civil liberties in the UK – plus the video has also got QR codes in it – letting people find out further info just by point their camera phone at it.

Singer, Neil Tenant is pretty clear about his dislike of ID cards, “The idea is that it’s sung from the point of view of the authoritarian New Labour-style government. ‘If you’ve done nothing wrong, you’ve got nothing to fear’ is always used as a justification for ID cards.” He continued later, “but I think we all have a right to privacy. I feel it’s a move that suggests we have to justify ourselves to the state before the state will trust us, and I think it’s for us to trust the state and not the other way round. I think the government has to win our trust, not us win their trust.”

QR Codes
QR Codes there things are all over the place in Japan, with most business cards having them on them.

Nearly all cameraphones in Japan have the ability to use QR codes, as do a few in the West, with the Nokia N95 being most widely available.

To gather the information behind the codes, you simply get the app loaded on your mobile and roughly frame square graphic. Translation of the graphic to text is pretty fast, with a URL popping up on your mobile screen, letting you easily connect to it.

Examples in the PSB Integral video are links to No2id.net and stories on privacy.org like Thousands of ‘False Matches’ Possible Under UK ID Scheme and the BBC.

Mashup
To tick further current tech-buzz boxes, the PSBs have also released every frame of the animated sequences in a 50Mb PDF – all 2408 pages of it.

They’re encouraging people to use this and other material to remix their video and upload them to the YouTube group that they’ve formed for it.

We’ve included a YouTube-d version of the video , but best results are had from going to the site to watch the full resolution version.