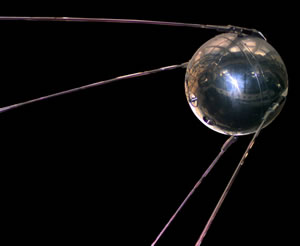 Today marks the 50th anniversary of the launch of Sputnik by what was then the Soviet Union.

It’s the date that the first man-made object was placed in to geocentric orbit, going around the world in a elliptical path.

The achievement was a huge publicity and psychological coup by the Russian over the United States. 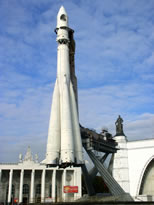 The rocket used, the R-7 Semyorka, was a modified version of their first intercontinental missile, originally designed to carry a nuclear payload.

Russian went on to achieve putting the first living creature into orbit and the first space walk too (Alexei Leonov).

Sputnik 2
Following fast on the heals of Sputnik 1’s launch was the logically named Sputnik 2. It’s claim to fame was carrying the first living passenger into orbit, a dog named Laika.

Never slow to promote the scientific advancement of mankind, Goggle are marking the occasion with an adoption of their logo – featuring, not surprisingly, Sputnik 1 shooting around the earth.