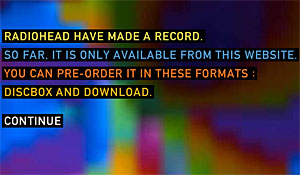 Radiohead have long been known as a band who like to do things differently, and their approach to selling their long-awaited seventh studio album certainly breaks new ground, with fans invited to pay whatever they like.

The new album, In Rainbows, will be released in two formats: as a digital download or as a lavish ‘discbox’, containing a CD copy of the album, two ‘heavyweight vinyl’ 12″ records, plus extra songs, artwork and lyric booklets.

The discbox costs £40 (with shipping in December), while fans are invited to pay whatever they like for the digital download, which will be available from the 10th October.

When users get to the checkout page on the site, a question mark pops up where the price would be with the caption, “It’s Up To You”. 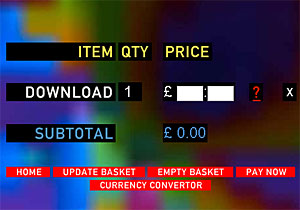 Click again and the page refreshes with the words “It’s Really Up To You,” and that’s exactly how Radiohead are selling this album – you decide what you want to pay, and if that’s nothing, so be it!

Radiohead are currently without a record deal – their EMI/Capitol contract expired after 2003’s ‘Hail to the Thief’ album – and famously shunned Apple’s iTunes, insisting that the album should only be offered as a compete entity, and not split up into separate downloads.

Radiohead’s decision to go it alone has surprised some industry pundits, with an A&R executive at a major European label reported as saying that the self released album “feels like yet another death knell.”

“If the best band in the world doesn’t want a part of us, I’m not sure what’s left for this business.” 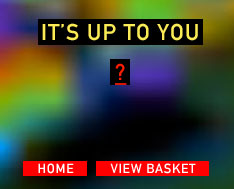 Although Radiohead are taking a risk by offering their album for as little as free, we suspect that there’s enough fans out there willing to pay a reasonable amount for the digital download. Indeed, we already know several people who have been happy to shell out around a fiver for their digital copy.

With signed bands usually expected to get less than 30% of overall sales revenue from the business, Radiohead’s sales will be free from record label and distribution partners taking a slice, although the band are gambling on enough people paying for downloads.

Radiohead aren’t the first act to (potentially) give away their new album though, with Prince slapping his album on the cover of the Mail on Sunday newspaper in July. Although many saw this as a desperate move for a fast-fading popstar, but the diminutive Purple One he had the last laugh as all 21 of his consecutive London concert dates subsequently sold out.

5 thoughts on “Radiohead Tell Fans: “Pay What You Want””