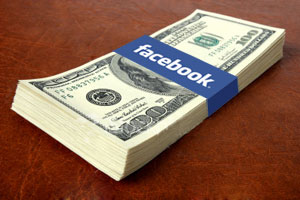 The outrageously popular social networking website Facebook looks to be attracting the ever-bulging wallet of Microsoft, with the company rumoured to be about to buy a 5% stake, valuing the site at an eye watering $10bn (£5bn).

According to the Wall Street Journal, the deal would make Facebook’s ludicrously young founder Mark Zuckerberg, 23, rich beyond his wildest dreams, and turn him into one of Silicon Valley’s wealthiest dudes.

It’s all speculation at the moment of course, but the kind of figures being bandied about would put a value of $238 on each of the 42 million people who have profiles on Facebook. 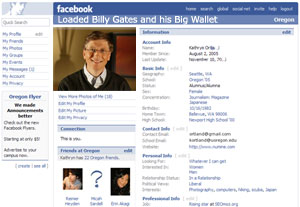 Currently scooping up around 200,000 new registrations every day, Facebook is currently as hot as steaming dollop of bull dung, with Google also reported as being keen to slap down some wonga.

“Facebook may well be one of the most important platforms in the future, and Microsoft controls platforms like Windows and IE, so it’s important for Microsoft to work with Facebook,” commented Josh Bernoff, a Forrester Research analyst.