The globe spanning conglomerate that is Fox Interactive Media has today announced that it wants to get inside your phone with the launch of its ad-supported mobile Internet version of MySpace.

A beta mobile version of the hugely successful social networking service will be offered to consumers this week, followed by similar versions of other popular sites in the Murdoch empire, including IGN, AskMen and RottenTomatoes.com.

The MySpace Mobile Web will deliver free content, tools and services letting punters send and receive crucial MySpace messages and friend requests on the move. And there’s more! Thanks to the generosity of Murdoch’s mates, punters will also be able to comment on pictures and profiles, post bulletins, update blogs, find and search for chums and view or change mood status while being treated to a steady flow of adverts. 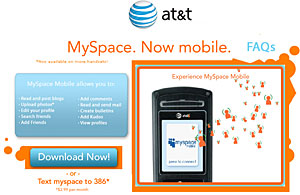 A more fully featured version will also remain available to paying customers of AT&T, Helio and other U.S. wireless subscribers, with an iPhone-tailored application in the works.

“We believe ultimately that people will access the Internet on mobile phones,” prophesied Fox Interactive Senior Vice President John Smelzer said in an interview. “We want to support that behaviour as best we can. The more we can replicate what’s going on online the better.”

Meanwhile, users with browser-equipped mobile phones can still access the full version of MySpace on their phones for free, but seeing as it’s one of the worst designed sites in the known universe, maybe it’s worth putting up with all those ads after all.