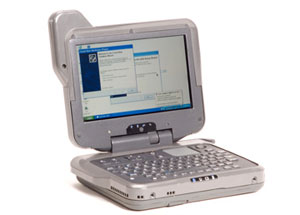 Designed for rugged outdoor blokes with lantern jaws and a taste for adventure, the launch of the General Dynamics Itronix “ultra-mobile” PC has been announced for us Europe types.

The fully-featured, extra rugged computer with looks only a mother could love seems tough enough to survive a kick about in the park, and measures up at 4.3 inches by 6 inches and weighs two-pounds. 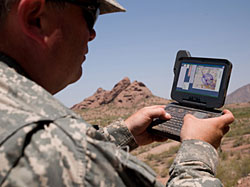 Lurking inside its tough-guy, manly-grey two-tone exterior is a rather girly-sized 5.6-inch touchscreen, with battery life rated at 3-6 hours (without radios), with “battery management power saver utility and ultra-fast battery charging capability.” 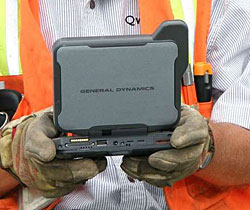 The GoBook packs shock-mounted internal parts, impact absorbing bumpers and is able to withstand extremes of temperature. There’s also a sealed keyboard for keeping out the dust and humidity, and the little tough guy complies with some HazLoc (hazardous locations) standards.

There’s a fair bit of functionality built into its beefy form factor, with the machine offering WLAN, Bluetooth, GPS, 3G, an optional fingerprint reader and a removable hard drive.

Tough, mean and durable enough to happily hang out in industrial, commercial, military and government environments, the GoBook MR-1 base configuration will set you back a pricey £2,618, with a commercial release expected this month.