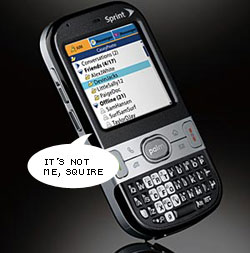 Blimey. Palm have managed to confound us again.

First founder Jeff Hawkins decides to ditch the ‘smartphone companion’ Foleo only a few months after declaring it to his bestest idea evah in the whole world, and now his outfit are saying that the new phone being announced next week isn’t going to be the Centro as widely expected.

In their official Palm Blog, spokeswoman Stephanie Richardson has posted up a short piece entitled, “It’s a Bird, It’s a Plane, It’s not Centro.”

“There’s been a lot of buzz about the new device our friends across the “pond” are planning to announce on September 12th…” she comments, “and it’s not the Palm Centro smartphone!”

And then she disappears in a cloud of HTML with a teasing, “Check back later for more info.” 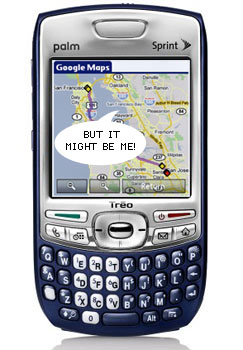 Naturally, we’re feeling a bit foolish after confidently speculating that it would indeed be the cut-price yoot orientated Centro smartphone being unveiled next week, so what have Palm got up their sleeves?

Seeing as they did a good job of keeping the Foleo under wraps, there’s ample room for speculation here, but – what the heck – we feel no fear of being proved wrong yet again, so we’re predicting that Palm will be releasing a European version of the Palm OS Treo 755p.

Despite its chunky, pocket bulging lines, the Treo received near-unanimous positive reviews when it was released Stateside in May (see below), and to be honest, we’d be happy feeling a bit of 755p love too.

One thing we can reveal exclusively is that whatever the phone is, it won’t be immediately available in the UK.

Our Palm insider (nudge, nudge, nod’s as good as a wink etc) told us that journos hoping to scoop up free samples from next Wednesday’s launch party are likely to leave empty handed because the phone won’t be available for “weeks” after the launch.

Whether that’s two weeks or – as in the case of the Treo 680 – a whole load of weeks all piled up together in a big heap is anyone’s guess.

We’ll be at the launch next week, so check back to find out if our already-omeletted faces manage to get a bit more eggy with the announcement of a ruddy Windows Mobile device instead of the 755p.

Edit: this site thinks it will be a smartphone-edition version of Windows Mobile 6. They’re probably right.

But here’s some reviews of the 755p, just in case:

2 thoughts on “Palm European Release – “Not The Centro””