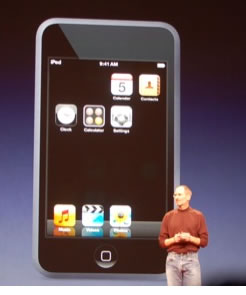 Apple have launched the next generation of the iPod, the iPod Touch. Not surprisingly with a name like that, it’s got a touch screen, a la iPhone.

Think of it as an iPhone without the phone – let’s call it the iDon’tPhone shall we.

All of the big fuss that’s been jabbered about for ages on tons of news sites and blogs for the last month or so has come to pass – much the same as day follows night. Can you tell we’re pretty jaded about Apple at the moment? That and the _endless_ hysterical excitement associated with it.

Anyway, other details are sketchy, but WiFi is one feature – like Microsoft had from the outset with the Zune. In response to the Apple launch, Microsoft have dropped the US price of the Zune form $249 to $199. 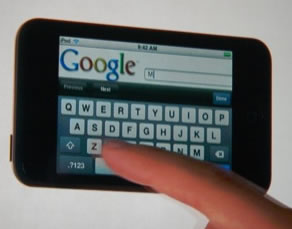 iPod becomes PDA
Looking at the shots of the Touch accessing Google via it’s iPhone connection, it’s pretty apparent to us that Apple is transmogrifying the iPod into a PDA, or at the very least, an Internet access devices.

Ringtone Sales
Apple are also getting into the ringtone game, by selling them for the iPhone through the iTMS. Here’s the sting – you have to buy the music to listen to it (99c), then you have to pay for it again (99c) to use it as a ringtone.

Joint Online License
Who comes up with these ideas? Well the pressure from the music industry that’s lead us to here. A Copyright Tribunal decision has decided that music should now have to be paid for twice, once to have it on the machine, the second time to listen to it. I’s called the Joint Online License.

Via
Pics via Engadget