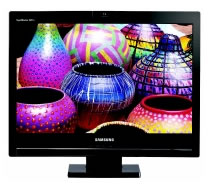 Samsung have announced two 22″ monitors with a mic and 2mpx video camera built-in.

All that is needed to get going with the top of the range, 220TN, is an Internet- connected Ethernet cable in the back as all of the required software is installed.

They say that it’s been optimised for Microsoft Unified Communication (UC).

The 220TN, has embedded WinXP providing support for Microsoft Messanger and Skype by default and all of this without the need for a separate PC.

We’ll be dropping over to the stand to get some live pics later.

One thought on “Samsung: Monitors with VoIP Built-in: IFA”