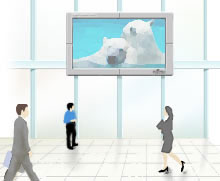 Not that long ago, a 24″ CRT TV screen sat in your living room would mark you out as a well-wedged consumer, drawing envy from lesser mortals squinting at bedsit portables or bog standard 20″ units hired out from the once mighty Radio Rentals.

Come the 90s, impressively well dimensioned Plasma and LCD screens started to take a hold in upmarket homes, with the slimline, stylish goggleboxes expanding to wall filling screen sizes of 37″, 42″ and upwards.

As we rocket through the Noughties, the size of the screen has become something of a status symbol for technology companies, keen to grab bragging rights as the biggest pixel swingers in town.

Samsung and Sharp have been at the forefront of the “look how big my screen is” competition, with Sharp wooing punters at the Consumer Electronics Show this year with a 108″ LCD beast while Samsung knocked out the “world’s biggest plasma screen” last year, boasting a massive two million pixels (1,920 x 1,080) of performance in a 102″ screen. 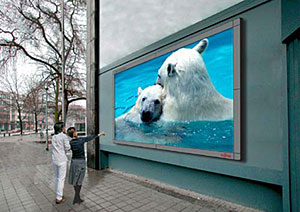 But when it comes to sheer size, there’s nothing that can hold a candle to the new 231″ monster display from Fujitsu.

Although the physical size of the screen is awe inspiring, the specifications aren’t so hot, with the display only offering a measly 512 x 288 LED pixels of resolution – meaning that you have to stand at least 5m away to see what’s going on.

Designed for outdoor advertising, the Super Frontech Vision LD offers a full set of inputs, including DVI, with the display supporting 16 million colours and packing a brightness of 5,000 candelas per square meter.

Naturally, the price of this colossus is floating high up in the stratosphere at an almighty ¥63 million ($520,000), although there is a 116in model also available for about a quarter of that price.

From
History of TV screens