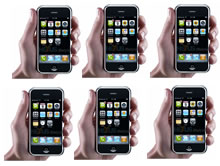 iPhone’s appear to be taking out chunks of the wireless network at Duke University in the US.

We won’t get all technical on you by delving in to the tech-laden reasons as to why it _might_ be happening – they still don’t know how it is happening for sure – but the upshot of it is they think the iPhones are generating up to 18,000 requests per second.

Barrages like this are crippling the WLAN kit, as it tries to deal with and make sense of each of them.

Duke have been in touch with Apple about the problem, but so far the communication with Apple has been “one-way.”

Given the number of tech mad loonies that have bought iPhones in the US, it is a little strange that no other sites have recorded the same problem.

For the details on the story, trot over to Network World

One thought on “iPhones Take Out WiFi Network”