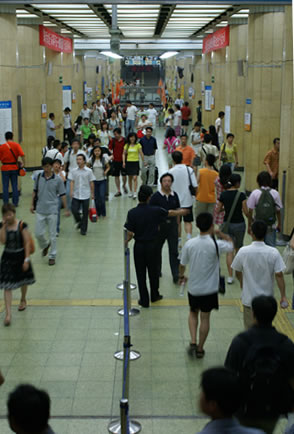 Writing about the announcement of the new PSP brought the following little ditty to mind – one we’ve been meaning to write for a while.

You may be thinking that the Sony PSP hasn’t been the hit that it might have been, because in and around Europe you don’t see many on the street.

It’s easy to lull yourself into a false state of knowledge when you’re in a major capital, leading you to think that the behaviours that you see around the street are representative of the world as a whole.

This was clearly show in our recent visit to Beijing, where PSP usage told a distinctly different story. There were tons of the things knocking around, primarily on the Beijing Underground.

Used mostly by the under 30s, but not limited to males, we often saw people playing games on them during the crushed morning rush hour (and it was a serious crush). The other frequent use was using them to catch up on TV or film programming.

Alongside the genuine PSPs, we also spied quite a few copy PSPs having a similar form factor, but a rougher, less-engineered finish.