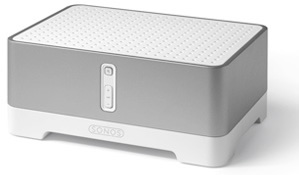 Sonos like several other companies make music streaming systems. The BU130 consists of a controller and two ZP80 players all packaged into a single large’ish cardboard box. For the review, Sonos also supplied a docking cradle for the controller, which is an optional accessory, but it makes the whole system a lot neater in appearance.

ZP80 Player
The ZP80 is about 5 1/2 by 5 1/2 by 3 inches high. It has a built in (auto switching) power supply so the unit’s quite heavy. It has analogue audio in and out and digital optical and coax outputs. There’s also two (switched) Ethernet ports and WiFi built in. The analogue or digital outputs need to be connected to an amplifier and speakers that you already own (or have to go out and buy).

Controller
The controller is the crowning glory of the package and it’s what makes Sonos different from other systems. It’s about 6 1/2 by 4 inches and just under an inch thick with a 3 1/2 inch diagonal display. There are 9 dedicated buttons (nicely backlit) and 3 “soft” buttons under the display. It’s very iPod’esque with its own scroll wheel.

Software
Sonos supplies software for Windows (XP and Vista) and Macs (MacOS X 10.3 or higher). This is the only complaint for the system. It’s functional and works, but it would be nice if Sonos supported existing systems directly (like iTunes or Slimdevices Slimserver). The software will recognise iTunes playlists, but it’s disparate. Set-up a playlist in iTunes, then restart the Sonos software and it will pick-up the new lists. It will do the same for Windows Media player lists too.

If you’re music is stored centrally on a NAS (network attached storage) the controller can access that, but it accesses it as a disk which can be problematic if the NAS is in a Windows domain. Unfortunately it doesn’t directly support streaming protocols that many NAS’s are now offering such as UPnP (universal plug and play), Slimserver, iTunes etc, which is a shame.

Once the software’s been set-up, the players appear and can be put into zones (a player can be in its own zone). This would probably come into its own with more than two players. You might have a kids zone and an adult (sic) zone then the controller selects which music plays in which zone.

The controller is wireless using an encrypted protocol (SonosNet) which connects to any players. The players form a wireless (and/or wired) mesh, so as long as the controller is in wireless range of a player, it can control all the players.

The music supported formats, connectivity, our conclusions and scoring will be published tomorrow.