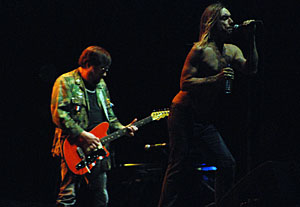 In Part One, we gave you the run down of what gadgets we decided to take along to Glastonbury 2007, now you can find out how we got on with them.

How the gadgets fared
Despite a near Biblical onslaught of rain feeding great rivers of thick, gloopy, welly-extracting mud covering the site, we’re happy to report that all our gadgets managed to survive the festival intact.

Now that Glastonbury has turned into a mainstream event stuffed full of the major broadcasters, cellphone reception was at five bars for almost all of the site. We had no problem sending and receiving texts promptly, although some of our friends reported long and annoying delays in receiving texts, resulting in missed meetings. 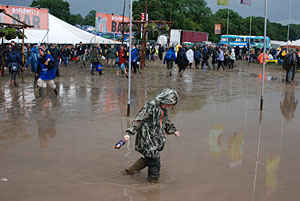 The extended Treo battery kept the Treo going from early Wednesday to Saturday night – pretty damn good considering the heavy use – but the emergency charger seemed fairly rubbish, swallowing up expensive PP3 batteries in exchange for precious little charge. Good job we brought along the back up battery.

There was an Orange-branded tent providing free phone charging facilities, but the queues were pretty hefty at times and who wants to sit about watching your phone get charged when there’s so much going on outside?!

Both cameras survived the mud and rain, although we found it prudent to shoot from under an umbrella when the rain really pelted down. Other times, we wrapped a plastic bag around the camera with a hole cut out for the lens. 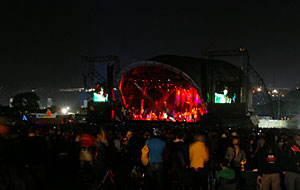 It worked fine, but next time, we might consider buying a proper weatherproofed camera as it was a bit of a pain constantly taking the camera out from its protective layers.

There’s also an argument for ensuring that your camera has a simple auto-everything mode, as it’s easy to get a little, err, bewildered by technology during the madness of Glastonbury (we got a little over excited during The Who’s first few numbers and managed to take a string of crap photos in black and white, focussed on a spot nowhere near the stage!).

At night we wrapped the cameras, phone, memory cards and spare batteries inside several layers of plastic bags, just in case we experienced a late night tent failure, but thankfully our flapping canvas held up to the nightly monsoons.

One thing we forgot was a decent lens cleaner which meant that we had to be extremely careful when removing the inevitable smudges of mud and raindrops from the delicate lens.