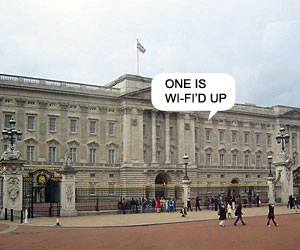 When to comes to Wi-Fi amongst the big financial cities, London is now The Don, according to a new survey.

Just like the Stereo MCs, the RSA Security report tried to get connected, donning its supercharged Pringle tin receiver and prowling the streets of London, New York and Paris.

According to their findings, London is now the hottie of hot spots, notching up a whopping 160% increase in wireless access points over the last 12 months.

The home of pie’n’mash, cheeky costermongers and HRH Lizzie recorded no less than 7,130 access points across the city, compared to 6,371 in arch-rivals New York.

The report found that our shoulder shrugging pals across the English Channel have taken to adopting Wi-Fi slower than an oven-ready snail, with Paris registering just 827 access points. 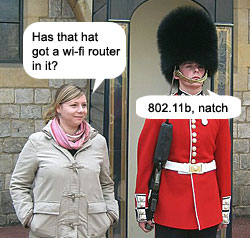 Looking closer, the RSA discovered that the vast majority of access points (94%) in London were for business use only, with just 6% being made available to Joe Public, via hotspots in cafes and libraries.

New Yorkers were far more generous when it came to sharing the wireless love, with 15% of access points being publicly accessible. In Paris, the figure was found to be 11%.

Unfortunately, the survey elected to only look at Wi-Fi access in three financial centres, so there was no comparative data on famously well connected cities like San Francisco.

London also whupped the competition when it came to wireless security, with 76% of business access points discovered by the RSA found to be secured against casual attack, with many using improved wireless encryption systems.

Paris wasn’t far behind with 71%, while in New York only 64% of business networks were secured.

“It is encouraging that almost half of all secured business access points are now using advanced forms of encryption,” said RSA spokesman Christopher Young, adding that he expected to see these numbers rise as more people become aware of the perils of operating inadequately secured wireless networks.

However, Young added the caveat that because many secured networks used default settings, they may remain vulnerable to determined attackers.