Google sparked outrage in the blogging world and elsewhere, when in January 2006 it decided to doctor the search results it gave users of its service in mainland China, to appease the government.

It was presented by those against the move as a significant blow against Google’s oft quoted mantra, “Don’t be evil.”

Having just returned from China (yes I’ll stop going on about it eventually) I heard that people there weren’t very impressed with Google within China, seeing it as a foreign company, trying to force its way on to the Chinese scene.

Moves like changing its name slightly to be more pronounceable in Mandarin have been met with hoots of derision, further weakening its standing. 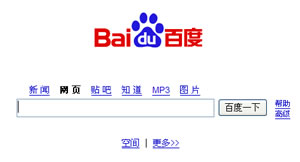 Locals find Chinese search services like the market leader Baidu far more palatable, leaving Google in a unusual position of being in a far-trailing second position with 19% of the market, as measured by Analysis International. Baidu has 58%.

In response, Google has been running around doing deals with many of China’s major Internet players – China Mobile (321 million subscribers!); China Telecom (the dominant Internet provider); and China Netcom – in an attempt to work around the problem. The latest of these is its recent deal with sina.com, China’s most visited (and US-listed [check this]) Internet portal, to provide search results in return for an ad-revenue split.

It appears that the majority of Chinese just don’t want to use Google.

But Google’s search results are better
A recently reported blind test carried out in China (mentioned in a very small piece in the China Daily newspaper), where the participants had no clue which search engine was being used, found that, of the 11,864 test searches that were carried out, 48.2% showed Google had the better results, while 39.8% favoured Baidu.

Out of eight categories, seven were won by Google, with Baidu only coming out tops for entertainment.

It was also noted that the older and more educated in the 18-40 age group preferred Google.

Will Google Win?
It appears that, for once, the name Google is an actual disadvantage. It will be interesting to see if the partnership deals eventually make a difference, or whether they’ll just have to wait until

Either way, it sounds like the type of success that Google has come to expect in the West will be a long time coming in China – if it ever arrives at all.

2 thoughts on “Google In China: Must Do Better”