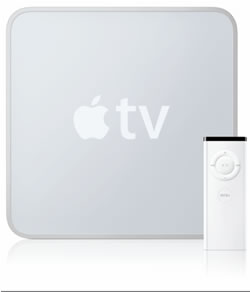 Big day in the Apple TV world yesterday.  No, not the DRM free update.  Not the Jobs/Gates conference at D5 either.  Certainly not the YouTube announcement or the 160gb BTO option (seemingly US only?).

No, it was a big day because…

Just as I was settling down to an evening of quality streamed video entertainment
I turn on the unit and get stuck in an infinite rebooting loop.  No menu, or perhaps a menu for a split second, followed by the Apple logo over and over and over again.

No luck turning it off and on five times.  No luck resetting the factory state when the menu’s stayed on long enough for me to do it.

Turns out that when Apple released the iTunes update yesterday, they forgot to do some QA on the server side of things and killed all of the Apple TV units globally in one foul swoop.

They seem to have sorted it out now according to this post, but for a very long hour late last night I was in a very bad mood – so much so I packed the device into my bag today and was all ready to go over to Regent street and demand a replacement.

First strike AppleTV!  You best be on your guard if I’m not to start looking at the PS3 with eager eyes (even if it is £500!)

Howard Scott, Digital Manager at The Marketing Store, London, has been working in digital marketing for the past 11 years and is the founder of the blog Adventures in Digital Marketing where he talks about the state of digital marketing and the effect technology is having on the industry in general.