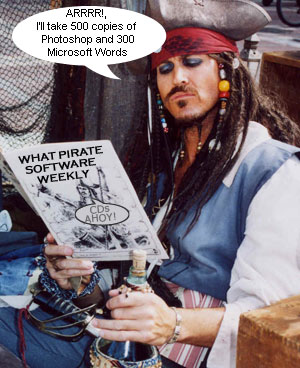 It looks like the battle against software piracy remains in choppy seas, with piracy rates remaining stuck at 35 per cent for the third consecutive year.

According to research from IDC conducted on behalf of the Business Software Alliance (BSA), things aren’t all bad, with the piracy rate dropping in sixty-two countries out of the 102 studied.

However, the skull and crossbones flapped mightily in thirteen countries, and these were the countries where the personal PC market grew the fastest. 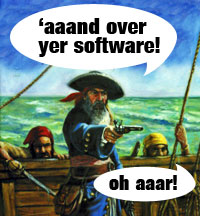 The worldwide growth of the PC market saw the overall cost of piracy jumping higher than Capt Morgan’s parrot on crack, increasing by $5 billion, adding up to a hefty 15 per cent increase over the previous year.

Blackbeard Country
The country found to be wearing the most pirate hats and going ‘Aaarr!’ the loudest was the scourge of the software seas, Armenia, notching up a piracy rate of 95 per cent. And that’s a lot of booty in their chest.

Rummaging about in the chumbucket of software thieves, we find Moldova in second place (94 per cent), followed by Azerbaijan (94 per cent), Zimbabwe (91 per cent) and Vietnam (88 per cent).

The Good Captains
With a cheery blast on the hornpipe and a swig of grog, we can reveal that the Jolly Rogers of the software oceans are the United States with just a 21 per cent rate of piracy, followed by New Zealand (22 per cent), Japan (25 per cent), Denmark and Austria (26 per cent).

Us Britishers recorded a rate of 27 per cent, while China managed to squeeze their landlubber-worrying piracy rate down 10 per cent to a still massive 82 per cent.

Even so, the net worth of the legitimate software market in China increased 88 per cent from 2005, adding up to a treasure chest of $1.2 billion in 2006.

Adding up the pieces of eight in the global chest, the report calculates that the total value of software installed on computers worldwide is $100 billion, with only $35 billion of that being illegal bounty.

(images courtesy of No Quarter Given and Pirate Tales).

2 thoughts on “International Software Piracy Rate Remains At A Third”