Developed by academics at the University of Portsmouth, a new mobile phone game aims to help international students deal with the ‘culture shock’ of arriving in bonkers Blighty and cope with the rigours of university life in Britain.

Dubbed ‘C-Shock,’ the game was developed by the University of Portsmouth’s academic and games technology expert Nipan Maniar, an ex-overseas student who arrived in the UK from India five years ago.

Maniar explains, “I thought it would be great to have a learning vehicle or device to help people overcome the culture shock because if you have not experienced such things before, it’s hard to know how to react or behave properly. I found some aspects of British culture very novel, and undoubtedly things such as interacting socially with others, say, in a pub were very different to what I was used to in my own culture in India.” 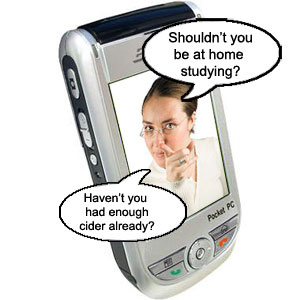 Working with his research assistant, Dr Emily Bennett, Maniar mustered the support of the University’s International Office and the British Council and went ahead to develop the first prototype of the game.

The gameplay involves trying to reduce the ‘culture shock’ of an international student arriving in the UK for the first time and Maniar says that the game could also incorporate city guides, college registration information, campus maps, emergency information with opportunities for in-game advertising.

It’s a mother in your pocket. Eeek.

Getting a little carried away, he goes on to describe how the game would act as a sort of ‘e-mother’ and advise new students how to react or behave appropriately.

We’d imagine the last thing students want is a virtual mother nagging them on their phones (“you’re not going out wearing
that!”) but we can see how a portable guide might be useful for foreign students.

We haven’t seen the game yet, but we can only assume that for accuracy’s sake it contains lots of references to alcopop-laced students performing drunken acts in city centres, lots of bad dancing to bad music and long hours spent loafing in bed following copious amounts of vomiting (excuse us while we go all nostalgic for our college days here).

The game is reported as being in its final stages of development and is expected to be available for download through the University of Portsmouth website later this year.