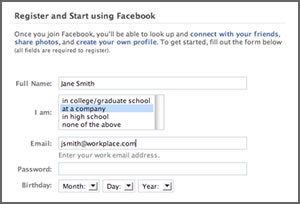 The Internet has undergone a revolution in the past few years, and one of the major trends we’ve seen is that of social networking. I suspect that a substantial proportion of those reading this are a member of one or more social networks, and those who are not are surely aware of the phenomenon which MySpace and others represent.

Whilst I have used MySpace, Bebo and other social networks in the past, the one which I have found consistently useful (if that is the right choice of word) is Facebook. This site began in the US as a way for students at the same college to communicate with each other and organise their social lives together online, and has since come to universities everywhere and most recently, with the advent of region-based ‘networks’, to everyone. Certainly in my social circle, Facebook is gaining real traction, probably surpassing market leader MySpace as the place to join.

How do FaceBook and MySpace Differ?
In many ways the two services could not be more different. A subtle difference is the emphasis which Facebook places on keeping in touch with those who one already knows. MySpace, on the other hand, is quite keen to help you meet new people. The Facebook approach sits more nicely with the way most people like to interact with others; MySpace demands what you could call a social paradigm shift, if you are to take it seriously. Whilst that is not a criticism of MySpace (I know someone who is ostensibly head over heels at the moment with a person he met entirely over MySpace), it does mean that the barrier to Facebook adoption is considerably lower than that of its larger rival – an important fact given the relatively low overall percentage of the population using social networking sites currently. Future growth in the space will predominantly come from those outside the current 16-25 year olds that make up the majority of their users, who are more happy to be flexible with how their social lives operate. Facebook is more equipped to meet the needs of those who are not so flexible. 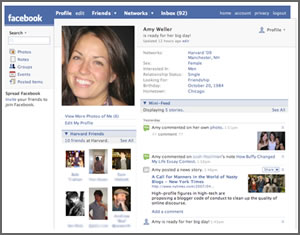 Customisation
Another key difference is way in which MySpace users are able to customise their profile pages, whereas Facebook users are allowed no such features. Whilst the claimed potential to achieve self expression by creating an appalling design for one’s profile page is a mystery to me, I do see the appeal of the widgets platform MySpace offers.

For the uninitiated, widgets are small boxes containing content from a third-party provider. That could be an embedded YouTube video, the contents of an RSS feed or even a dynamic app, such as livechat2im, which allows a visitor to a profile page to have an instant messaging chat with the owner directly through the page. None of this is possible with Facebook at the moment, although Mashable reported a rumour this week that Facebook is considering implementing widgets. Pete Cashmore argued that widgets is currently the key functionality MySpace has which Facebook does not, and that it would be the best way to ‘steal the social networking crown from MySpace’.

I’m not sure I entirely agree with Pete. I think it is in a better position to grow in the medium term future than MySpace is, but it is continuously under pressure to get quick growth by trying to steal users from MySpace. Building a ‘better MySpace’ probably isn’t the way forward if it is to ultimately overtake MySpace, and rumoured features such as its classified ads service seem to indicate that Facebook is aware of that. Facebook needs to be clearly different from MySpace, and adding widgets would possibly damage that.

Who will win long term?
I will end with a prediction; in five years, if Facebook doesn’t pander to the temptation to be like MySpace, it will be significantly bigger in terms of users and pageviews than the Murdoch-owned rival.

Huw Leslie is editor of UK-based Web 2.0 and software blog GizBuzz. He is a co-founder of Oratos Media and Klaxis, and his personal blog is For Crying Out Loud.