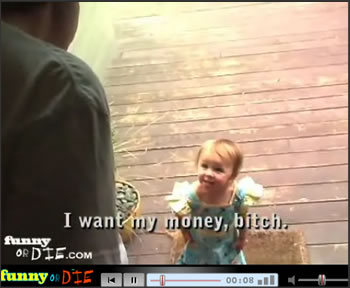 Wired have a slightly gushing piece about a new niche video site in the YouTube mold – FunnyOrDie.

The central premise – take ‘celebrities’, add user generated content and a large dollop of VC funding from Sequoia Capital – mix up and hope to get a huge money-making success on your hands.

So far, the runaway success, in terms of video views, is a piece called The Landlord, (warning – spoiler follows) where the landlord is two years old and the tenant is US comedian, Will Ferrell. The joke is two fold – a child is the landlord and it swears.

Many of the commentors obviously find it funny, but many do not. We’re in the second category.

Once you’ve got the idea, for us it failed to make us laugh. Have a watch and tell us what you think (probably NWS) …

We would have used the video on FunnyOrDie, but they don’t honour the AutoStart=false flag and it would have played as soon as you opened this Web page – which is most tedious.

It obviously works in the US as it is supposed to have had 7 million views in the first 24 hours of release and is now sitting on over 12.5 million views.

Watching some of the other videos on the site proves one thing to us – comedy writing and the results it produces are rarely international.

Plenty of the videos featured just weren’t funny to us as UK viewers – they didn’t even raise a titter. One reaction was even more strident “I never want to see that site again.”

What will this lead to? We think a further fragmentation of comedy video sites along geographic lines? Or, as we suspect, the rise of sites that will gather country-focused comedy and point to videos on the myriad of video hosting sites that are springing up on a near-daily basis.

The sites making the advertising money will be the meta-referring sites, and the people paying the bills will be the hosting sites