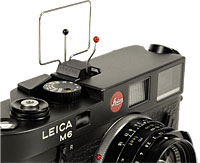 Photographers looking for a simple and effective way to quickly frame shots might like to swivel their snapping eyes in the direction of the Ikodot.

An unusual and rather innovative thing, the Ikodot is best described as a ‘sports finder’ and is used for framing pictures without the need to look through a LCD display or peer through a small optical viewfinder.

A bit like a gun sight in use, the finder slots into a regular camera hotshoe and takes the form of a rectangular metal outline with two small raised metal balls in the middle.

The user lines up the two balls to frame a photograph, with the lens coverage dictated by how close the finder is to your face.

Of course, this process is going to need some fine tuning and practice before it gets anywhere near as close as using a LCD screen, but it does have the advantage of being fast and discrete: photographers trying to sneak some snaps at a theatre, for example, will appreciate not having to illuminate the hall with each shot.

The Ikodot also offers advantages for four-eyed photographers who perhaps find it hard to focus on a LCD screen or get close up to an optical viewfinder. It’s a shame that the finder can’t fold flat when not in use though.

The Ikodot is available in graphite and chrome finishes from www.ikodot.com for $99.

One thought on “Ikodot Sports Finder For Cameras”