A new survey by Q Research discovered that a third of UK consumers aged 11 to 25 were slapping down up to £5 a month on digital tunes, with three per cent shelling out £25 or more a month.

Not all the kids are feeling the digital love though, with 45 per cent of respondents spending but ne’er a bean on music.

A hefty 85 per cent of respondents were found to be owners of MP3 players with the ubiquitous Apple iPod being the most popular device by a long chalk.

The survey found that the young ‘uns were the biggest users of free download services – almost half – but 43 per cent of under 16s were still paying up to £10 a month, with a hardcore nine per cent splashing out as much as £10 to £25 a month. 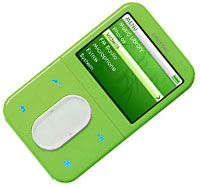 When it comes to the real big spenders, the lucrative 20-24 year olds sector were flashing the most cash, with two thirds spending up to £10 a month on downloads, and 16 per cent spend from £10 to £20 a month.

Downloading tunes direct to mobile phones is still a niche interest though, with punters put off by the high cost.

Liz Nelson, chairman of Q Research, commented that the survey showed that, “while there is already a very buoyant market for paying for MP3 files from the internet among young people, they are very aware of the cost of downloading files to their phones.”

“This finding is underlined by other projects we have done, where we have discovered opposition among young people to watching video or receiving video ads to their mobiles because of the cost,” she added