One of the big cheeses at Google, vice president and chief ‘Internet evangelist’ (say wah’?!) Vinton G. Cerf has been shining up his crystal ball and coming up with his predictions for the future. 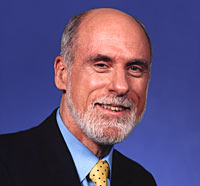 Looking deeper, deeper, deeper into his shiny orb (oo-er), the beardy Cerf revealed that it won’t be personal computers fuelling the growth of the internet. Instead he reckons that the expansion of the worldwide web will be powered by mobile phones, with countries like India snapping up zillions of the fellas and getting online en masse.

Talking to Yahoo, Cerf whipped out his Big Book of Internet Facts (BBOIF) and observed that the amount of people accessing the web has expanded quicker than Fatty Arbuckle’s waistband at a pie eating contest, with the numbers soaring from just 50 million in 1997 to nearly 1.1 billion today.

Despite this, the web still only reaches a miserly sixth of the world’s population, prompting Cerf to comment, “You will get those other 5.5 billion people only when affordability increases and the cost of communication goes down.” 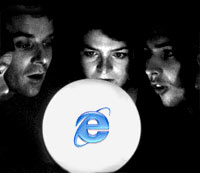 “The mobile phone has become an important factor in the Internet revolution,” he added.

Flicking further through his BBOIF, Cerf said that there are 2.5 billion mobile-phone users worldwide with numbers rocketing in developing countries led by China and India.

Naturally, Google wants a slab o’the action, and has been expanding its research and service offices in India, hoping to increase the current meagre total of just 40 million people online – just 3.5 percent of India’s enormous population.