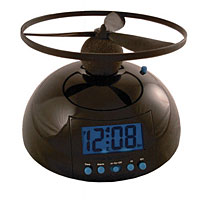 Are you always late for work? Does your alarm clock fail to wake you up in the morning? Have you developed a reflex action that bashes the ‘alarm off’ button while you carry on counting sheep?

Hard core slumberers and die hard alarm ‘snooze button’ activators fed up with always being late may find the Flying Alarm Clock the answer to their problems.

Like most bedside alarm clocks, there’s a big LCD display and buttons for setting the time and alarm.

Unlike regular alarm clocks however, there’s no snooze button to be found and – as you can see – there’s a rather curious contraption sitting on top of the clock.

When it’s time for you to get out of your jimjams, this totally daft clock launches a flying propeller that hovers around the room, making strange buzzing noises while the clock’s alarm sounds.

The only way to shut the thing up is to get out of bed and put the propeller back on the clock – by which time you should be wide awake (or have your neighbours hammering through your walls in rage).

The clock is a commercial development of an idea that won a prize in the Taiwan International Design competition in 2005 and has just appeared for sale on a Danish website for around £27.