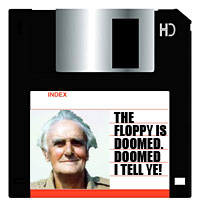 Electronics giant PC World has announced that it is to stop selling floppy disks once the current stocks run out.

First introduced by IBM way back in 1969 as a big flapping thing, the floppy disk hit mainstream consumers after Sony released the familiar 3.5 inch format in 1981.

From then on, floppy disk became the de facto storage standard right up to the late 90s as its feeble storage capacity (1.44MB) failed to compete with an onslaught of cheap memory storage formats including memory cards, USB keys, rewritable CDs and removable hard drives all capable of holding gigabytes of data. 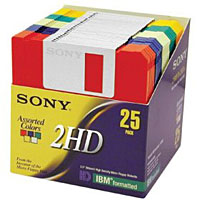 In decline since the late 1990s, the floppy once ruled supreme, shifting more than two billion units in 1998 – a figure now down to a measly 700 million last year.

Of course, you’ll still be able to pick up floppy disks elsewhere for now, but the end is surely nigh for this long serving piece of technology.

Although we’re tempted to get a bit misty eyed at the fall of the trusty floppy, we still can’t quite forget the long nights spent feeding our Amiga 1200 (and later our PC) masses of floppies containing programs spanned over several disks only to hear the grinding sound of doom right at the end.

Although we certainly got familiar with the “Non-system disk or disk error – Replace and press any key” error message over the years too, we’ll still miss the things – and they were always a satisfying shape to throw around the office when the network went down too.

So farewell, dear floppy. You served us well.