It’s time for Blockbuster to get into the online download business. The market is only now emerging and the pickings are slim, but it’s not too soon for the company to expand its offerings to include web-based movie downloads and rentals. It could be the only company to offer a true “triple-play” of mail, brick-and-mortar, and online access – a combination that (given innovative marketing) could give a second wind to a dying brand and uniquely position the company for long-term success. 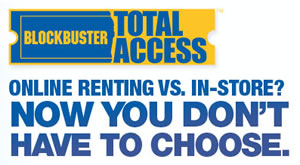 Failure to Launch
Blockbuster has a lousy record when it comes to identifying and quantifying emerging trends that may impact its business. Once a leviathan in the consumer video space, Blockbuster has seen its DVD sales migrate to mass retailers such as WalMart and Target; its DVD rentals cannibalized by Internet-based mail order houses (NetFlix); and its movie rental revenue snacked on by PayTV and on-demand providers.

The result? The company enjoys the unique ‘blessing’ of managing hundreds of retail outlets, many of them struggling to stay open, others being shuttered on a weekly basis. The ‘local video store’ may never fade away, but Blockbuster’s version of it is dying a slow death.

What Train?
Of particular embarrassment was Blockbuster’s inability to foresee the emergence of NetFlix. Blockbuster’s senior strategists sat idly by as a no-name upstart gobbled up millions of Blockbuster converts who wanted a better video experience and knew how to take advantage of a basic Internet-connected PC.

Even now Blockbuster continues to play second fiddle to a once-tiny company that had an interesting idea, a decent understanding of technology, and a unique business model. Blockbuster’s leadership simply didn’t see the train coming, and by the time they did realize that NetFlix was for real, the train had pretty much rolled over them.

To give you an idea how much was at stake, simply take a look at NetFlix’s Q4 2006 earning statements revealed on Wednesday, January 24, 2007: NetFlix now has more than 6.3 million subscribers (compared to Blockbuster’s 2 million online subscribers) and enjoyed fourth quarter revenue of $277 million. That’s got to hurt!

Hard to Shake Old Habits
In March 2006, Blockbuster CEO John Antioco stated that the company had a “digital future” that could very well take it to a greater size than it achieved as a primarily store-based business. If judged by Blockbuster’s conduct since that time, he must be the only one who knows that strategy.

Yes, Blockbuster was an early investor in CinemaNow but never was a strong supporter of the concept or the company (it was too busy tending to NetFlix-related wounds). Yes, in June 2006 Blockbuster reportedly tried to buy a majority stake in Movielink for $70 million but the deal was killed. In both these cases, however, the Blockbuster brand was not involved – these strategies involved leveraging an existing online brand (neither of which have to date enjoyed any success).

Today, Blockbuster still has no real presence in an important emerging market while brands such as Amazon and Apple have already started building their own online rental and sell-thru video businesses.

Yet a recent shift in Blockbuster’s strategy may be the first sign that the company is actually aware of what cards it does hold. 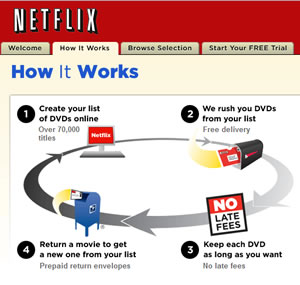 Extending the Logic of Blockbuster’s “Total Access”
In November 2006, Blockbuster rolled out its “Total Access” program, an initiative that gives customers the option of returning DVDs through the mail or at their local Blockbuster store where, should they choose, they could pick up movie for free (but with time limit on viewing and return required at the same store). According to CEO Antioco, Total Access is the reason why Blockbuster’s online user base grew to 2 million at year-end 2006, up 500,000 in the fourth quarter alone. This is just speculation on his part (no evidence was cited) but it is interesting nonetheless.

To blend the concept of the direct mail DVD rental service with its local retail stores – and to brand the offering separately – would appear to be an obvious move. For Blockbuster, however, this represents a strategic revolution compared to its usual blind-leading-the-blind strategic thinking. (Again, this is the same company that thought it could bury NetFlix in just a couple years.)

Tactically, blending these two businesses makes a lot of sense. Strategically, however, it’s a better move than first glance might indicate.

New Moves for New Media
What’s the one thing that Blockbuster has that NetFlix, Apple, or CinemaNow don’t have? Hundreds of ‘brick-and-mortar’ retail video stores. None of these competitors has an interest in getting into the brick-and-mortal video distribution business, but this is precisely why Blockbuster has a lock on this notion. Ironically, it may be the local video stores that end up the centerpiece of Blockbuster’s digital future. They provide Blockbuster with a one-of-a-kind local marketing channel through which it can educate its customers about the benefits of online distribution and how to enable it, while still serving the needs of those interested in mail or in-store procurement.

Combining the online mail-order DVD and stand-alone retail businesses should be but the first step in a larger journey that culminates in a Blockbuster “triple-play” that also incorporates a full-blown online movie rental and sell-thru service. Not a CinemaNow or Movielink service, but a Blockbuster-branded offering that, when blended with the retail and mail-order channels, represents a comprehensive but tightly integrated offering that competitors simply can’t match. This comprehensive vision would serve Blockbuster well: it could minimize or recast what cannibalization did occur because of digital distribution by providing a comprehensive yet cohesive market message, one in which Blockbuster is itself recast as the true innovator in consumer video.

As well, Blockbuster has the brand clout to help legitimize online video distribution. Think of how Apple’s entry into the online video business (and its pending introduction of the AppleTV set-top box) has drawn attention to the progress that online video has made, as well as enhanced the awareness of online movie services. Blockbuster’s entry would have a similar impact, but instead of speaking to Apple fans and technology enthusiasts, it would whisper to the mass audience of Internet households that (given the right equipment) a broadband connection is now a legitimate conduit for delivering on-demand movie content to your primary home TV.

Sure, this type of prognostication is best reserved for long-term strategy discussions, but that’s exactly how Blockbuster should be thinking. After all, if you’re going to say you have a “digital future,” it’s to the future you should first look. Then and only then can you identify the steps necessary to enable that future to materialize.

A claim must first be staked out, this one in a virtual world where Blockbuster’s current and future competitors are building fortifications. And guess who’s setting up camp? NetFlix.