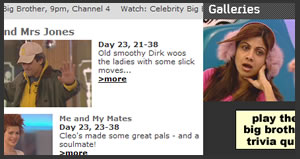 We all know that the Web is all about Trust, don’t we … and those companies that do not prove that they’re trustworthy will lose out.

While writing the piece about the shocking state of DRM and the Big Brother stream, it struck me that beyond the trust that was being lost through their insistence of using DRM-restricted content, they were also losing the trust of their paying customers another way.

When people sign up for the Celebrity Big Brother Season Pass, they understand that they’re paying for access to a live stream of the ‘action’ (as far as that goes) – and that’s what they’re lead to believe.

We viewers understand the rules. There’s an understanding that there’ll be a delay to avoid ‘rude’ words going out. Eventually the paying punters also understand that other conversations will be blanked out with sound effects, even when it’s completely clear that there’s no need for it – it’s designed to create intrigue.

What is deeply wrong however is repeating the previous hours footage between the announcement of the name of the contestant leaving the house, and their actual leaving.

It’s just wrong. The end result is that it makes me think less of Channel 4 – definitely not a good idea when they’re betting so much of their future on digital delivery.

People who pay for the pass are paying for that ‘insiders view of the house’. They hope to see what the general TV viewing public can’t.

When people have paid for it, not letting them have access to what is behind the broadcast footage is wrong.