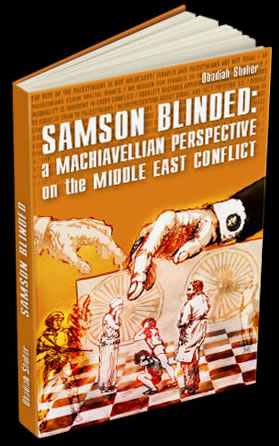 It’s written under a pen name, Obadiah Shoher, as Israeli law criminalizes racism and incitation. With this knowledge you have some sort of idea as to the views that are put across.

You’ll not be surprised to heard that it’s not a regular read for us, but we’ve given it a once over and Shoher does appear to have some fairly extreme views. We’re told that …

Shoher denies ethnic-blind democracy and argues for expulsion of Arabs
from Israel. He rejects democratic process dominated, he asserts, by liberal and Arab voters, and calls for violent opposition to police efforts at removing the illegal settlements.

On the even more worrying front, we understand that they call for nearly dismantling Israeli army and fully relying on nuclear response to counter possible Arab aggression. Nice!

The US-sponsored civil war left over 1.5 million Afghanis dead. Their corpses cause no concern on the Capitol Hill. The fuss is about 400 detainees who are treated at Guantanamo a bit worse than under the Taliban and considerably better than under the Northern Alliance rule. Had they been killed instead of arrested, human rights activists won’t care.

Shoher isn’t just shooting in the dark. The book, Samson Blinded: A Machiavellian Perspective on the Middle East Conflict has been downloaded by more than 170,000 people from 78 countries.

What they heck?
Now we all know that these Best-Of awards aren’t always worth the electrons that they’re written on. They’re often too easy to influence by getting readers to vote over-and-over again, and we would suspect that those with extreme views would have the kind of readers, nay followers, that might have the inclination to do this.

Here’s the reality – The Internet and blogs are for anyone who want to write anything – and that includes things that you might not like. `What’s important is peoples right to express themselves – and that should never be removed.

One thing that you can do is not link to it, thus depriving it of search engine ranking.