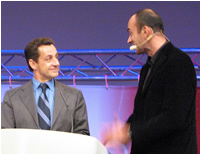 There’s a right kerfuffle going on in the blogosphere at the moment centering around TechCrunch UK, but with possible implications for two of the biggest names in the blogging world, Six Apart and the main TechCrunch (TC) site.

Truly a storm in a T(C) cup, but it does raise a lot of interesting issues.

What’s the fall out?
Arrington has come off very badly in this and from reading the many comments posted about it, I think it’s highly likely that many of the previous fans of TechCrunch may well stop reading it, in disgust of the way they feel it’s been handled – particularly those from Europe who attended Le Web. TechCrunch UK may well have been terminally damaged through this.

Prior to this, not a bad word has been even whispered against TechCrunch. It was hugely widely read making it one of the most popular sites on the Internet – its RSS feed alone has 144,000 subscribers. Now, in the matter of a couple days it’s possible that it may struggle to maintain its position.

This also extends to Six Apart, because of the Le Meur connection. The size and success of Six Apart was built on support from bloggers – but it’s arguable that they are now sufficiently popular with the general public that they are beyond being damaged by bloggers railing against them.

Only time will tell if Six Apart stick by Le Meur. This could well be dictated by the reaction of the bloggers as they look to continue to rant on the subject and run out of things to say about TC. At the very least I suspect Le Web won’t be hitting number 4.

What issues are raised by this?
Again accountability and transparency of business relationships (many question the deal between Le Web and TC) have been shown to be of the upmost importance in the world of blogging – and quite right too.

It also raises the issue of who owns a comment once it has been posted to a site – is it the poster, or is it the owner of the site it is posted to?

If you want more details – and there’s plenty more of them, you can find them on TechCrunch UK; CrunchNotes or more generally on a search for Sethi on Technorati

On a much lighter note, well done to Jemima, writing for the Guardian, in digging out this photo of Mike Arrington, which we’re sure will be referenced many times over the next period of inevitable fuss around this issue.